Since 1974, the mission of the Afro-American Cultural & Historical Society Inc., Tri-City and Hayward has been to provide a vehicle for Black Americans in the area to share our history through educational and cultural activities as well as networking together in harmony and friendship and kinship with multiethnic groups throughout our community.

We believe that disseminating information and sharing promotes understanding of the values, customs and beliefs of our multiethnic community. This awareness enhances respect of diversity, bringing about more unity in the community. We honor the ties that bind us all together.

We are life members of the Association for the Study of African American Life & History (ASALH). 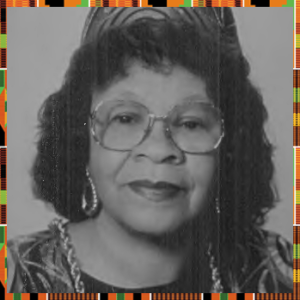 Jean P. Ficklin is a highly distinguished member of the Tri-City area. She set the stage for future instructors of color by being the first African American instructor in the Newark Unified School District. She spent 33 years educating and inspiring our youth as a teacher before retiring in 1987. Since her retirement, Ficklin has remained an active member in the community.

She conceived the organization in 1974 as a result of her involvement on the Newark Commission of Social Concerns. The organizational meeting was held in the Newark home of Mr. and Mrs. Burnett Vanish. African Americans from Fremont and Union City were attracted to the organization and the bond was established for the name. The first officers were: Doris Rutland, Chairperson; Ficklin, Publicity Chairperson and Burnett Vanish, Treasurer. The first Black History Program attracted new members, Mr. and Mrs. Otis (Glenna) Foster, who suggested our name. The mission of obtaining a charter was accomplished under the leadership of Glenna Foster and Herman Ficklin in September 1976.

Since the organization’s founding, Ficklin and society members have been actively involved in education, civic affairs, human service needs, political activities on an individual basis, have served in council appointments as commissioners and worked closely with local schools and churches.

Ficklin also holds memberships in the NAACP and Alpha Delta Kappa International Sorority for Women Educators, among a variety of other groups.

The City of Newark, the California State Senate and Assembly, the County of Alameda, the Newark Unified School Board and so many more have previously recognized Ficklin for her excellence as an educator and cultural historian.